Dirty-Minded Signage…”If You Know What I Mean”

I hosted my WANA pal, Karen McFarland, for an impromptu dinner last Thursday night. She and her hubby are TONS of fun, and she got me telling stories. Specifically, she got me going about my trip to Missouri last year to see my family.

She thought I was maybe embellishing the signs. So, in honor of Karen, I’m re-running this post. All of you who missed it the first time deserve your Monday morning laugh.

If you’ve read about my family’s Almost X-Rated Garage Sales and Gang-Banging Chickens, you’d know we’re just a little bit…off-center. Both sides of my family are filled with peeps who are amazing and hysterically funny. I’m one of those rare souls who LOVE family trips.

The big surprise when I visited last year was all the Dirty-Minded Signage. Only in the Bible Belt could people refer to monikers like this with a straight face.

You’ll see what I mean below.

I’ve gotten used to the Springfield, MO convenience stores that don’t seem to make anyone else pause. 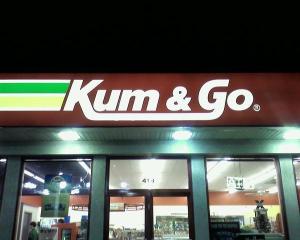 It took me a few visits to take that place in stride.

The first time, I sat in the passenger seat while my husband pumped gas, clutching my sides, pointing at the sign and gasping for air. Maybe it was the little registered trademark symbol they include on the end (like someone’s dying to steal that logo). Maybe it was jetlag.

Then we went to Branson, where the traffic moves SO slow that you have plenty of time to really check the place out. 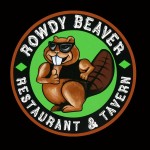 I was doing  fine until we passed the Rowdy Beaver. (Yeah, for real…and they have MULTIPLE LOCATIONS. The newest is on Dickson Street. I mean, what were they thinking? They couldn’t go a few blocks over to Percy or Main or wherever?)

After that, it was a free for all – we were in hysterics about everything we passed.

The God And Country Theater was across from Billy Bob’s Dairyland. The Ragin’ Rhino Tattoo parlor was just down from the Hillbilly Kitchen. Plus, we started using Leanne Shirtliffe’s (aka The Ironic Mom’s) trick of adding “if you know what I mean“ on the end of every name.

It didn’t matter if it was funny or not, it was hilarious to us.  I mean, you try passing a billboard that says “Ride The Ducks!…if you know what I mean.” Go ahead. Add IYKWIM to all the businesses in this post. (Two words: Coffee. Snort.) You’ll see.

When my Branson-dwelling cousin got to our lodge that night for a fish fry, I demanded to know what was up with the Rowdy Beaver.

I (of course) wanted to know what he did call it, figuring the locals had classed it up a little. He blushed to the roots of his hair and mumbled that he’d tell me later, rolling his eyes toward his parents and the older folk.

Well, if you read the links I put above, you’ve already seen what the “older folk” in my family will discuss. No topic is sacred.

They dragged the Rowdy Beaver scoop out of him in no time: Rather than call it the Rowdy Beaver, Bransonites refer to the place as “The Angry Vagina.” I doubled over laughing at this, staggering around the kitchen. Possibly I tinkled a little.

“Well,” he says, “we do go over to The Bearded Clam in Kimberling City sometimes.”

I looked at my uncle. “He’s making that up, right?”

My uncle shook his head and said, “It used to be worse before they closed the bait shop next door.”

When I asked what could possibly be worse than naming an eating establishment “The Bearded Clam,” they said the old bait shop was called, “Master Baiters.” Swear. To. God.

And do you know the super-duper worst part of this story? The Bearded Clam is billed as a family restaurant.

Like I said, only in the Bible Belt would there be minds clean enough to eat there without making scads of juvenile jokes (like I would). I’ll bet they all wear Christian Panties for dinner. Amen. 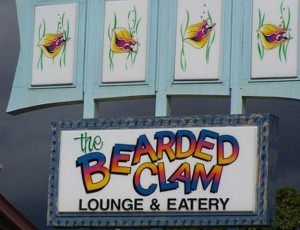 It’s true that my family members aren’t the ones who own these establishments, but still…

When we visited the Lake of the Ozarks, we saw the absolute winner of the Dirty-Minded Signage Award. I still can’t believe anyone would name their hotel this but I guess it does leave an impression on people.

Do you suppose they get a lot of multiple visitors? Or just one good one each night? (Sorry, I couldn’t resist.)

The name of the place really is Big Dick’s Halfway Inn (you know you’re clicking that link). If you stay at this resort the next time you’re at the Lake of the Ozarks, please write to me about it!

I tell you, this trip put a whole new spin on the “Show Me” state thing. Since most of my people live there, I’ve concluded that I derive from some pervy stock. Who knew, right?

OK, it’s your turn. Do you have some places with signs and such that crack you up? What about if you add “if you know what I mean” on the end? Enquiring minds can’t wait to hear  what you come up down in the comments section!