Are You Fighting Dirty? 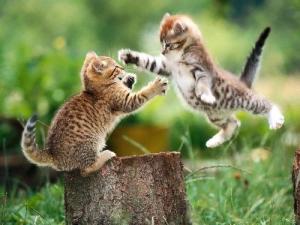 This weekend, when my honey was cleaning the office (SQUEEE, I can find more books!), he came across a piece of paper that cracked us up. This four page document – called, “Dirty Fighting Techniques” – helped save our relationship.

Dirty Fighting Techniques isn’t some Kung Fu or Kickboxing how-to guide. Nope, this is a list of twenty-two items – a quiz, if you will – that we were given by our counselor when we went to him to make us or break us as a couple back at the end of 2006.

Like everybody else, when we met it was full speed ahead – all love muffins, all the time. I’d like to think we weren’t sickening, but we probably were. We got along amazingly well. I’d never had such a peaceful relationship. That first year or so of dating, we only had like two fights. Or so I thought…

You see, I’m one of those people who thinks the shortest distance through a fight is straight up the middle. Then boom, it’s done and over with.

Side Note: for anyone that doesn’t get the passive aggressive thing, here’s what it really means:

So, why did we go to counseling?

Well…I’d broken up with him. Things weren’t moving forward (blah-blah-blah)…you don’t need to be bored with all the backstory. Suffice it to say that we were on the same page the first year or so, until his dad passed away. Then there was grieving time and the dogfight over my health (that was when I got blood clots, like EVERYWHERE) and we never really got back together on the You-Are-It-Forever track.

Actually, I was on it all by my lonesome, so I broke it off. This was a HUGE surprise to my honey and we decided to go to counseling before we went our separate ways.

We picked a rockstar psychologist, herein known as Counselor Guy (CG). He is the hero who got us back on the You-Are-It-Forever track where we belonged, only with much better skills to make sure we could stay there.

Visit One: CG reached in and found the fight we’d had fifteen months before in the hospital when my honey’s dad was in for cancer treatment. By the time CG was done with us that first visit, everybody was smarting.

Example of CG’s phrases: “’I don’t know’ might work in the real world, but in this room it means ‘I don’t want to talk about it’ and it’s unacceptable.” Oof.

Visit Two: CG asked if we felt like we fought. We looked at each other and agreed that we had the occasional discussion. “Oh, no, you fight plenty,” he corrected us. “You just don’t do it out loud.” Ouch. He wanted to know if we were aware that were fighting. (That would be no.)

Visit Three: He gave us a list of Dirty Fighting Techniques and asked us to put a  checkmark next to those that we engaged in.

At one point, I glanced at my honey’s list and was dismayed to find that he’d checked almost nothing. I had been checking them as I went along and was shocked at the end to see that I engaged in like FIFTEEN of the twenty-three techniques. I’m not kidding. Apparently, I was a dirty fighting hot mess.

To look over and see my honey’s document with almost NO checks was horrifying. I was kind enough to point out a few that I thought he engaged in. (See? Dirty fighting!)

CG immediately barked at me to “Stay in your own document!” Yeah, that was embarrassing…

Turns out, the two of us approach tests differently. I mark it up as I go along and my honey reads every question and then goes back and fills in the answer. But I was still irked because he only had five items checked and I had fifteen.

Because my honey rocks, he rationalized that I might have fifteen “small ones” but “his five were whoppers.” (Like CG was gonna fall for that one.)

Within 6 visits, we’d learned how to fight well, which means keeping it clean. (Don’t worry, I’ll share with you what that means.) Within 6 months, we were engaged; we married eight months after we started counseling. We still get tuned up by the amazing CG each and every month, which helps us keep it clean.

Here is a clean fight summed up in 4 easy steps:

Sounds simple, doesn’t it? Go try it. It’s really hard to do when you’re mad.

Now, why would I be throwing myself under the bus like this and talking to you about Dirty Fighting Techniques?

Tomorrow is Techie Tuesday, when we discuss a piece of technology or a technical point of writing. Understanding the difference between clean and dirty fighting will give you a TON of mileage in your scenes. Great books are filled with conflict. And great characters (who learn important lessons).

If you need plausible arguments and dialog, Dirty Fighting Techniques will help you achieve this. These techniques can be applied with a friend, family member or a significant other…it doesn’t really matter. Every entry on the list I’m sharing tomorrow is guaranteed to make the other person see red. If you’re writing fiction, that anger and tension is a REALLY good thing so stay tuned tomorrow when I discuss the ones I think work the best.

What about you? Do you fight dirty or clean? Is fighting something you’ve learned to do well, or is it on the list of things that makes you hyperventilate? Enquiring minds always  want to know at More Cowbell!

39 Responses to Are You Fighting Dirty?