Yesterday, in our Life List Friday, we had a huge daisy chain of blog hops that stretched for miles through the Twittersphere. We hosted, blogged, drank virtual drinks and attempted to inspire writers everywhere. 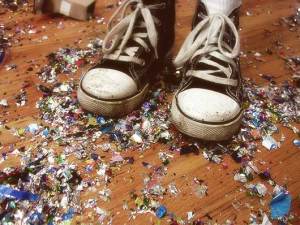 Anne-Mhairi made a glittering grand entrance to the party

Anne-Mhair almost didn’t make it here to More Cowbell, due to having to fight traffic over twelve other Life List Club sites and the Atlantic Ocean to get here from England. She persevered and HERE SHE IS.  Please send lots of comments and Life List Club feedback to make her feel welcome. Oh, and chocolate! Definitely send chocolate to munch on while we read your comments.

Who You Are
by Anne-Mhairi Simpson

It’s a grey day outside, but it’s only just gone 10am and I’ve been to the gym and had my healthy, gluten-free breakfast. The gluten issue recently raised its ugly head, telling me in no uncertain terms that I am majorly intolerant of gluten in any form (even oats), so I’ve cut it all out of my diet.

On a separate but relevant note, the Flashdance theme song came on the radio as I was driving home from the gym. (Yes, believe it or not, these two things do have a common thread.)

I can’t call living gluten-free a goal. No, it’s a necessity. I have felt rough beyond all measure this last couple of weeks and it’s only since I cut out everything that has gluten in it (including oats, which I didn’t originally know had gluten in them) that I have felt better. Therefore, living gluten-free is not going on my list of goals. It’s just something I have to do for my health. Like breathing.

Or writing. The Flashdance song reminded me why I write in the first place. Not because I want to or I have to. There is no outer motivation. There’s not much of an inner one, either. I don’t even think about it. It just happens. It’s something that’s there, a part of me, whether I like it or not. Like breathing. Or gluten intolerance.

Chuck Wendig wrote a great article yesterday (I think it was yesterday, but maybe that’s just when I happened to see it) about what it actually means to be a penmonkey. As opposed to a pen-muggle. He has also written in the past about the fallacy of being compelled” to write. It’s not something we have to do or we’re going to chew our hands off. It’s what we do.

So, in a way, it’s kind of daft to even have goals about it. Yes, I know we’re all about the goals, but this is the Life List Club, not the Goal List Club.

You see, I didn’t get to go gluten-free by degrees, although I kind of did. I thought oats were gluten-free, so I cut out every other form of gluten and switched to oat flake cereal at breakfast. A week later, I was still feeling icky. Then I found out about the oats. Cut them out. Fast forward three days. I was so relaxed and happy yesterday I’m sure I made several of my friends nauseous.

But I couldn’t set a goal to gradually fade gluten out of my life. It was damaging me, more and more, so I had to stop it altogether. Like you can’t fade breathing out of your life. Or writing.

The really big goals are there, in front of us, our dreams. The things we must acknowledge openly that we want, otherwise we will only be half ourselves. Or less. If I didn’t write, I don’t think I’d be me at all. Or maybe I would, only lacking in an excuse for gazing into the
middle distance when I’m supposed to be booking someone’s flights to Montenegro, or re-organising the seating plan for a conference. Maybe I’d still be just like I am now. But I’d rather write. People understand the flakiness a bit better when you tell them you’re a writer.

Well, they don’t. But I like to give them the benefit of the doubt. It’s just the way I am.