College Football and The Naughtiest Fans In America

Since it’s my birthday week, I get to make myself giggle as much as I want, which will certainly extend to the blog. I’ve got Debbie Herbert here today, to discuss her late-life love of college football and why her favorite cheer will always be, “Go Cocks!”

It all started a few weeks back when she cheered for her team on Facebook. I (of course) raised my virtual hand and said, “Um, excuse me?!” Tell me about this cheer… And a post was born.

Cheering for Cocks
by Debbie Herbert 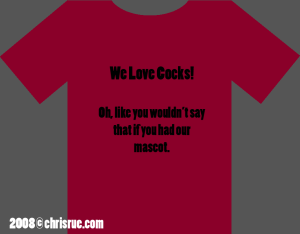 In case you can’t read the shirt:
“We love Cocks!
Oh, like you wouldn’t say that
if you had our mascot.”

Sometimes, it’s not easy being a Carolina Gamecock fan. When you scream “Go, Cocks!” you wouldn’t believe the disbelieving looks people throw your way. Or, if you’re a female, the ribald winks from men. But with a mascot like “Cocky” Sir Big Spur – what’re you gonna do?

I was born in South Carolina where my Dad was a student at USC.  Although I don’t remember it, the first few years of my life were spent in the shadow of the Columbia stadium.

[Jenny here: Hey, we have a USC here on the West Coast too! I wonder what would happen if the Trojans met up with the Cocks…you know, for an exhibition game.]

Probably like a lot of girls, I had zero interest in football growing up and never attended a game.  All that changed when I got married and moved to Alabama. And became a devoted fan of the Alabama Crimson Tide.

Within weeks of moving to the state, I realized I couldn’t be neutral like Switzerland when it came to football. (Here in the South, football is not a neutral topic.) If people asked if I were an Alabama or Auburn fan, I’d better have an answer.

I live with 45 miles of Auburn and tried to become an Auburn fan. It didn’t take.

If I were going to learn to love football, why not cheer for a team with the most national championships in America?  A Bama fan was born.

Still, the Gamecocks held a special place in my heart.  So when offered free tickets to an Auburn/USC game I jumped on it. Husband and nine-year-old son in tow, I attended my first game.  We had a great time, but of all the thousands of stadium seats, a group of intoxicated Carolina guys were seated behind us.

We endured hours of ribald cheers.

Whenever the defense took the field we heard “Stiffen up, Cocks!” It was no better when the offensive unit played.  Then we were treated to a barrage of chants such as:  “Drive it hard, Cocks!”  “Go all the way, Cocks!” and “Cocks Rock!”

But the worst was at halftime.  The drunk guys behind us cheerily informed me that their drumline was affectionately called the “Wad Squad.”

I would have found all this hilarious if my nine-year old son wasn’t listening. Avidly.  I’m pretty sure he was old enough to understand the penis references but I gamely played stupid, like I didn’t get the jokes.

But by the end of the game…all the Cocky Talk didn’t bother me anymore.  If those fresh-faced cheerleaders on the field could hold up posterboard-sized signs spelling C-O-C-K with huge grins on their faces, I could deal.

When your mascot is a chicken, and associated with a slang word for a male appendage, you’ve got to have a sense of humor.

Even opposing teams get into the spirit, as demonstrated by these two members of the Florida Gator’s Marching Band:

Notice the hand movement accompanying that cheer. I’ll bet those college kids laugh themselves silly over it. And I just know that someone at every game holds up a sign stating: “Choke the Chicken.”

So humor me.  Pretend you are a Carolina fan with plenty of Cowbell.  What are some great cheers that would be fun to wear on a game day t-shirt? (If you can’t bring yourself to cheer for my team, cheer for your own!)

Jenny here:
I stopped short of calling this post, “Go Cocks!” But it was really, really close. I figured WordPress would banish me, but I sure laughed my butt off over it. Who knew there were such naughty football fans in the South?

Debbie is giving away a book today to one commenter, and I’ve put all the book details below. I hope y’all give her a warm welcome down in the comments section!

Deep in the bayou, a strange and beautiful world of merfolk exists…

Mermaid Jet Bosarge never fit in with her own kind. Her dark hair and eyes set her apart from the other merfolk. Which was why she fell for the wrong man, and why she is still paying the price. One that has made her unwilling to trust any man. Until she meets Landry Fields…

Agent Landry Fields is investigating Jet’s former boyfriend, but he knows Jet is hiding something, as well. At first he believed the beauty was involved in her ex-boyfriend’s dangerous undersea excavations. But when he realizes he is falling for a real-live mermaid, Landry’s by-the-book beliefs are rocked. Now can he save Jet and her clan from modern-day pirates to claim a future with the feisty beauty? 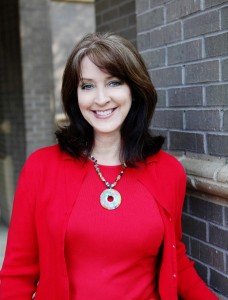 Debbie Herbert writes paranormal romance novels reflecting her belief that love, like magic, casts its own spell of enchantment. She’s always been fascinated by magic, romance and gothic stories.

Married and living in Alabama, she roots for the Crimson Tide football team. Unlike the mermaid characters in Siren’s Secret, she loves cats and has two spoiled feline companions. When not working on her upcoming books, Debbie enjoys recumbent bicycling with her husband, as well as spending time with her two adult sons.

43 Responses to College Football and The Naughtiest Fans In America