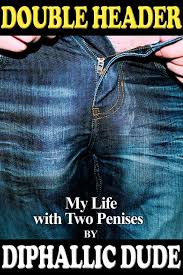 Many moons ago, I stumbled across a book about OMG, a condition I shouldn’t laugh at (but do), which stands for “Oversized Male Genitalia.” Today, I’ve come across a book called “Double Header: My Life With Two Penises,” written by a man with diphallia, a rare condition with two male sex organs.

This particular guy, who calls himself Diphallic Dude on Twitter (aka “Double Dick Guy”), answers questions about what life has been like for him, having this rare condition.  As he says in the book: “Nobody cared what I had to say before I came out about having two penises.” [You think?]

As you can imagine, he’s caused a sensation online, from his Reddit AMA in January 2014 (where he provided pictures) to his interview in Rolling Stone to his recent interview on the Playboy Morning Show. His book went up on Amazon on Christmas and is free with Kindle Unlimited. Everyone else pays $7.99.

He was featured on the front pages of RollingStone.com, Jezebel.com and was covered by The Huffington Post. Both Conan O’Brien and Jay Leno featured him in their opening monologues. Countless news agencies around the world broke the story when he went on Reddit and did an Ask Me Anything (AMA). Ranking as the 4th most popular Reddit AMA of all time (beating out the likes of Peter Dinklage, Bill Murray, Arnold Schwarzenegger and Harrison Ford), DoubleDickDude spent 48 hours discussing his life with a genetic condition known as diphallia.

Only 1 in 5.5 million males worldwide are born with two penises. However very few (if any) are born with two working, and by all accounts, attractive penises. After having managed to stay under the radar for over 20years DoubleDickDude (or DDD for short) amassed thousands of followers on Twitter and Tumblr in a matter of hours. In fact Twitter (temporarily) suspended his account for replying to his followers too many times!For the past year he has taken to writing a more lengthy and detailed account of his life so far. Very little could be detailed during a frenzy of questions from thousands on Reddit.

DDD goes from discussing his childhood, and explains how he knew he was special at an early age. His parents support grounded him in his early youth. We find out how he lost his virginity and was exposed to his peers. From there he discusses his wild streak of sexual adventures fresh out of high school. Recapping his favorite questions and answers, discussing sexuality and acceptance DDD covers the gamut.

Don’t worry, all the saucy and steamy stories he hinted at in his AMA are covered and then some. Like that 7-way orgy he briefly detailed amid the torrent of questions during his AMA. Not to mention the hunky straight gym jock who “went gay” and the poor girl who… shall we say, her lady place was a wreck after one time with DDD. It’s all in there and more!Written from first person perspective the narrative is raw, honest and often times gritty. Details are not spared and readers beware, naughty moments are revealed! The next time you see a man on the street with more than an adequate bulge in his jeans, it might just be DDD.

My husband and I giggled our way through the initial joke period:

But then we started thinking about the actual issues:

All that is discussed in his book and the Reddit AMA. Incidentally, according to the Rolling Stone interview, “he signed away the rights to the Kindle version of the book to the editor and released all profits to them as well.” He did the book to honor his father and to answer all the questions he received during the Reddit discussion.

“Diphallia is a rare condition; only 100 cases have been reported in the past 400 years. But in what little medical literature exists, diphallia is usually characterized as an unhappy thing: a herald of social ostracization, and spinal bifida, and a slate of reproductive complications too grotesque to explain here. DD has been relatively lucky — his complications are minimal, and his equipment’s in working order — but he didn’t exactly escape diphallia’s downsides.”

I have to give DiphallicDude full points for maturity and good humor. He suffered all the young bullying you can imagine and has managed to overcome a deformity and turn it into something positive. My hat’s off to him…but I can still giggle a bit. I think he’d want me to.

Young Turks did a video on this where they express many of the questions I had.

Warning: Put down your beverage! I almost died choking on coffee over this video.

You see what I mean? Here are 10 Fascinating Facts gleaned by Rolling Stone from the AMA discussion.

p.s. August McLaughlin, have you put in an interview request yet?

What questions would you ask him if you could? Do you plan to buy the book or follow him on Twitter? What jokes did the Hubs and I miss? Enquiring minds love to know these things here at More Cowbell!