Hurricane Sandy By The Tweets 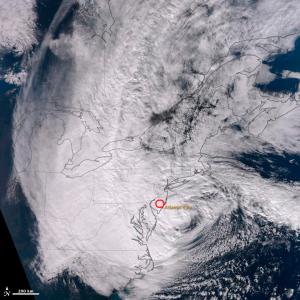 I spent some time following the photos and tweets on Hurricane Sandy yesterday and I’m sharing the standouts with you.

We keep seeing that social media is a huge game changer for natural disasters. You get literally millions of local reporters on the ground and the pictures were by turns amazing, frightening and downright funny.

@andrewzimmern: NOAA has officially upgraded #sandy from Tropical Storm to Shitstorm.  Trees in friends houses in NJ, power out all over eastern seaboard.

‏@wallacejnichols: A shark in the front yard. The new normal. #Sandy (photo from Kevin P McCarty) http://yfrog.com/movumudj (below is the yfrog photo)

This is FREAKY if it’s real.

Then there were the less serious ones:

@nerddad: #Sandy‘s beginning to remind me of the Kardashians. Big, wet, and willing to blow the entire East Coast just to get on TV.

@NYMag: RT @germanotes: Text from my dad: “rename the storm A-Rod and it won’t hit anything.” #sandy #arod

‏@nytdining: Hemingway would have known how to ride out #Sandy. Hint: his methods involve alcohol: http://nyti.ms/PD71VG

@Flatgrlprobz: I could probably build a flood barricade with all of my bombshell bras #Hurricane #Sandy (Flat Girl also asked Sandy to blow some bigger boobs her way.)

‏@sandyhuricane_: IF YOUR EMERGENCY HURRICANE KIT AINT GOT ALCOHOL & CONDOMS IN IT, YOU AINT DOIN IT RIGHT!

‏@sandyhuricane_: What if gangam style was actually just a giant rain dance and we brought this hurricane on ourselves? #Sandy

‏@juliasegal: I want everyone to stay safe but if all the supermodels in NYC blow away I am available for photo shoots. #sandy

And my all-time favorite Hurricane Sandy tweet (so far):

I laughed so hard when I saw that photo, I started choking.

What was your favorite natural disaster tweet? Is Hurricane Sandy affecting you and your loved ones? (If so, please let us know if we can help!) Enquiring minds always want to know these things here at More Cowbell!

44 Responses to Hurricane Sandy By The Tweets