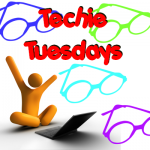 Welcome to Techie Tuesday here at More Cowbell! This is the day each week when I unleash my inner geek and we talk about some groovy piece of technology or a technical point of writing.

If you’re following the A-Z Challenge, today is the letter “U” and I  have an amazing present for you: the unbeatable, unparalleled “Goddess of Writing,” Margie Lawson!

She’s giving away a class to one lucky commenter, so please be sure to show her plenty of love. 🙂

A BIG THANK YOU to Always Uber-Cool, Never Boring Jenny Hansen for inviting me to be here today!

And THANKS for giving me the letter U!

What is uber-cool, unboring writing?

Writers know to avoid overused phrases and kill their clichés, but they don’t always grasp the importance of giving the reader something with a new twist. Lots of somethings the reader hasn’t read in that way before.

Sometimes writers ask me, “Can you have too much fresh writing?”

Yes. You can have too much of any component of writing. You want to avoid using too many of the same rhetorical devices, or too much fresh writing, in back-to-back-to-back paragraphs. Readers need some get-the-job-done-well writing too.

If the writing is empowered, and smooth, you’d be surprised how many different rhetorical devices and fresh writing can make page after page NYT strong.

NOTE: Every writing craft technique I teach is trumped by flow. If making a sentence or paragraph fresh impedes the flow, I recommend nixing the fresh writing and working with the original.

All the examples in this blog are from Margie grads. They know my deep editing techniques and use them well. Three are 2012 RITA Nominees: Lara Chapman, Elizabeth Essex, and Darynda Jones.

Suzanne Turner attended two 4-day Immersion master classes in Colorado. She finaled in contests, and has earned three perfect scores with her historical, The Lost Chord:

In London, Lord Cumberland never paid her more than a courtly greeting. Yet here he was, prowling after her. Tall, lithe, with hair so dark one had to describe it as raven and eyes so ice blue one would go mad trying to melt them. But the eyes were peripatetic. They roamed without ever focusing on one thing, as if no one thing could ever satisfy them.

“It’s a night for lovers,” he said in a voice meant to slip in and out of silk sheets.

“Warm,” Alice said in a voice meant to teach mathematics.

Example 1:    He was a thin, hollowed-out man. A stick passed along his spine would clunk like dried wood.

Example 2:  Wray stood still, pretending not to notice Hellard stalling, the way a hound does not notice a raised-tail skunk.

#1.    Fresh description that resonates with readers like the clunk of that dried wood. Onomatopoeia. Strong imagery. Perfect cadence.

#2.    Wray, body language, and pretending not to notice, deepens his character. Fun simile. Character-themed, Hellard is like a skunk with a raised tail. Parallelism. Fresh writing!

Golden Pen and Fab Five award-winner, Laura Drake, is an Immersion grad who received THE CALL in January. She landed a three-book deal with Grand Central. Her first book, The Sweet Spot, set in the world of professional bull riding, will be released in July.

Example 1:     She had to smile at Junior’s massive backside in overalls, waddling beside her tall, lean father. Their personalities were the flip sides of a coin as well; her dad’s Atticus Finch to Junior’s Vinnie Gambini.

Example 2:    Scanning the boxes of cereal, her gaze landed on Benje’s favorite brand. Her fingers tightened on the cart handle. How dare it still be here when he wasn’t? She’d gotten pretty good at steeling herself against these little jabs to the heart, small wounds that drained her if she didn’t avoid minefields like the toy section, or the kid’s clothing department. But how do you shield your heart from Count Chocula?

Example 3:   “You’re kidding, right? Those women would eat their own young, then gossip while they picked their teeth with the bones.” Bella fingered the rings on her necklace as if they were prayer beads.

Historical author, Elizabeth Essex, is an Immersion class grad. She has four books published with Kensington. This example is from The Danger of Desire, nominated for Best Historical Romance.

The Danger of Desire is set in London, November, 1799.  Here’s a three-paragraph excerpt from page 3.

Meggs flexed her hands on the handle of her basket and wiped her fingers dry on the inside of her apron, swallowing the jitters that crawled up her throat. It would work. It always worked. Drunks were easy. Easy as taking gin from a dead whore. She gauged the distance and picked up speed, keeping even pace with the rising hammer of her heart, aiming to reach them just as they left the watery circle of lamplight. She’d be in the dark, and they’d never see her until it was too late.

Three yards to go. Two. Eyes and ears stretched open, blind to everything but the waistcoat pocket and deaf from the roaring of her blood, she put her head down and plowed right into them.

And it was dead easy. A turn of her body, a firm shove with the prickly reed basket, and the culls were separated and falling. And there she was, patient as the saints, waiting for the precise moment when his purse eased into her waiting hand, like a ripe plum plucked from a tree.

Lara Chapman, is an Immersion class grad. Her debut novel, Flawless, a Cyrano love story with a modern-day twist, is nominated for Best Young Adult Romance.

His hand totally covers my own, sending a jolt of awareness through my body and landing squarely in my stomach like a basketball. Our school has like a thousand students and you can assume that half of those students are boys. But not once have I ever been so taken with a guy. Ever. It nearly kills me to break the contact with him when he pulls his hand away. I do my best to look unaffected as the jackhammer works overtime in my chest.

“Where are you from, Rock?” Kristen leans forward, effortlessly executing a move she calls the “lean and look”. You lean in, he looks at your chest. I’m silently satisfied when he doesn’t do his part, but keeps his eyes on her face.

I’m frozen in place, watching Kristen keep his attention while I sit speechless which, in and of itself, is something of a rarity. For once, I wish I’d listened to Kristen when she was telling me about the romance magazine article on how to get a guy’s attention.

“A southern boy,” Kristen drawls, leaning even closer so that she – and her boobs – are mere inches from his face.

Here’s an example where Sarah gets introduced to the new guy at school (an incredibly hot new guy).

“Rockford Conway. Everyone calls me Rock.”

I instantaneously think how much I’d love to be stuck between Rock and a hard place when he turns to acknowledge me. His gaze stops at the most obvious spot on my face.

Not my killer blue eyes.

Not my plump pouty lips.

Not even my precious little chin.

His eyes lock dead center on my face.

Deep Editing Analysis: The power of the rhetorical device, anaphora.

Darynda Jones, landed a three-book deal in a pre-empt with St. Martin’s.  Her Rita nomination for Best First Book is for First Grave on the Right.

Her third release January, 2012, Third Grave Dead Ahead, hit # 26 on the NYT Bestseller list (see below).

Example #1:
Reyes Alexander Farrow— the part- human, part- supermodel son of Satan— materialized behind me, his powerful shoulders glistening as steam rose around him, giving the impression he’d just come from hell. He hadn’t, of course. He’d escaped from hell centuries ago and was currently furious with me for binding his incorporeal body to his physical one. But that knowledge did little to lessen the effect.

Example #2:
I turned as Dad walked in. He’d come up from the bar by way of the inside stairs, which was fi ne, since he owned it and all. His tall, thin frame seemed to sag just a bit. His blond hair looked barely combed, and his bloodshot eyes were lined with a purplish hue. And not a pretty purple either. It was that dark grayish purple that depressed people wear.

Example #3:
Farley’s mouth formed a grim line as he took out a hunting knife that would have made Rambo proud and began cleaning his nails with the tip of the blade. Like Rambo might have had needed a manicure. The move was very effective. My first thought was how much it would hurt when the blade slid into my abdomen, pushing easily past the muscle tissue and through those ovaries with which I had no intention of procreating. Then Farley looked past me and stilled. With the reluctance of a man who forgot to take his Viagra before his weekly visit with his favorite prostitute, he slipped the blade back into its sheath.

BLOG GUESTS:  If you like, please chime in and share a deep editing point or two for Darynda’s excerpts.  Or – just say Hi!

POST A COMMENT AND YOU MAY WIN an online course by Margie Lawson, or Tiffany Lawson Inman, from Lawson Writer’s Academy!

Online Classes offered by Lawson Writer’s Academy in May:

1. Fang It to Me: Writing Vampires, Fantasy, and the How-to’s of World-Building
Instructor: Mario Acevedo

3. Panning for Gold, Not Silicon: Self-publishing and self-marketing for do-it-yourselfers
Instructor: Lisa Norman

Margie Lawson —psychotherapist, editor, and international presenter—developed innovative editing systems and deep editing techniques used by writers, from newbies to NYT Bestsellers. She teaches writers how to edit for psychological power, how to hook the reader viscerally, how to create a page-turner.

Thousands of writers have learned Margie’s psychologically-based deep editing material. In the last seven years, she presented over sixty full day Master Classes for writers in the U.S., Canada, Australia, and New Zealand.