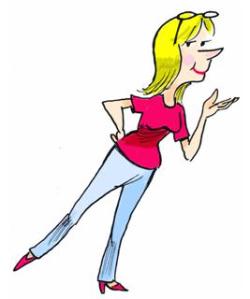 Happy Valentine’s Day to my pals here at More Cowbell!

Yesterday, I took you to the “Hopeless” Pit of Valentine’s Despair. Today I’m counting on Margie Lawson to lift you to the pinnacle of writing love with some of her amazing tips.

I couldn’t think of a better  present to give y’all on a day where I wanted you to feel the love. Margie is covering “visceral responses” and all I can say is WOW!

Thank you for being a SWEETHEART and inviting me to be your GUEST SWEETIE today!

Remember the last movie you saw that made you feel what an actor was feeling?

You were totally immersed in that movie world. So emotionally engaged, you tuned out reality. You focused on an actor’s experience from scene to scene, and felt surprised or worried, happy or scared.

Writers strive to write books that hook readers like the best movie they’ve ever seen.

I teach writers how to write and deep edit to hook the reader viscerally. When the POV character’s heart pounds, the reader’s hand goes to their chest.

Some writers keep their POV characters reacting to emotional stimuli in their head, thinking, cognitively processing the experience. They may think, or react, or dialogue. If it’s a big stimulus and the writer doesn’t give the POV character a visceral response, they’ve missed an opportunity to draw the reader deeper into the scene. They’ve missed an opportunity to write a page-turner.

If the reader intellectualizes, they are not viscerally engaged. They are not hooked.

Are you with me?

OK – some of you look confused. Need examples of visceral responses?

It’s okay on occasion to have a quick hit of a basic visceral. But I vote for working harder and writing fresh visceral responses too. Writing fresh will boost you toward a contract or onto a bestseller list.

Since it is Valentine’s Day, I’ll share heart-beating examples from three of my Margie-grad sweethearts, Nikki Duncan, Christa Allan, and Darynda Jones. I selected examples from these three because they all have recent releases. Enjoy!

Nikki Duncan has taken all my online courses, heard me present workshops in Dallas, and attended one of my Immersion Master Classes at my home in Denver. Here are three examples from her December release, TANGLED IN TULLE.

Her heart trembled within its shrinking cage. Hopes, doubts, fears coalesced and lodged into a word barricade in her throat.

You see the man who can grant your dreams. Misty’s conviction-filled words rushed Lori and shoved their hopeful way into her hammering heart.

Love that cadence! Please read that one out loud.

Did you notice Nikki used another rhetorical device? It’s parallelism. She balanced the end of the sentence. She also used alliteration. It may be subtle, but it carries power.

Third Example, Four paragraphs: (They’re in his car. He leans across her to close the door.)

With his torso brushing hers, his lips lingering close, he stared into her eyes. Her slip-n-sliding belly skidded. Her teeter tottering heart trembled, transfixed on an upward totter. He was going to kiss her.

She licked her lips and canted forward. Cravings crashed through her, dared her to suggest they head back inside for some alone time.

“Buckle up.” Trevor patted her leg and sat up, leaving her hungry and confused.

“Where are we going?” She reached for the seatbelt. That was twice now he hadn’t taken the kiss. Twice he’d riled her up, flipped the switch on her arousal, and turned away. There wouldn’t be a third.

Christa Allan, another Margie-grad, says she writes not your usual Christian fiction. Christa attended two of my 6 hour master classes (Dallas and Minneapolis), took my online courses, and reviewed some Lecture Packets for courses—before she got her first contract. Her third book, LOVE FINDS YOU IN NEW ORLEANS, her first historical, was released last week. Enjoy these two examples from LOVE FINDS YOU IN NEW ORLEANS.

She thought of Jacob and Tom, and heart pangs replaced her hunger pains.

Short and powerful! Love the play on words.

He didn’t give her time to think about the slow heat that rose from where his fingertips pressed into her, that made her heart race as if it could outrun the very warmth it craved, or the fire he created when he kissed first one eye, then the other. His lips…his lips gently kissed their way down the curve of her cheek, and when she felt them on her mouth, everything in her begged to melt into this one moment.

RWA Golden Heart winner, Darynda Jones took my online courses before she got her first contract. FIRST GRAVE ON THE RIGHT was released Feb. 2011. It was the first novel in a three-book series sold in a pre-empt to Jennifer Enderlin at St. Martin’s.

Still reeling from the potential identity of Dream Guy, I wrapped myself in the towel and slid open the shower curtain. Sussman poked his head through the door, and my heart took a belly dive into the shallow end of shock, cutting itself on the jagged nerve ending there.

I jumped, then placed a calming hand over my heart, annoyed that I was still so easily surprised. As many times as I’ve seen dead people appear out of nowhere, you’d think I’d be used to it.

Whoops! I neglected to let you know that Darynda’s main character, Charley, is the Grim Reaper. 🙂

When I opened the door, Zeke Herschel, Rosie’s abusive husband, stood across from me with vengeance in his eyes. I glanced at the nickel-plated pistol clenched in his hand and felt my hearbeat falter, hesitate, then stumble awkwardly forward, tripping on the next beat, then the next, faster and faster until each one tumbled into the other like the drumroll of dominoes crashing together.

Please read the example again. Out loud. You’ll hear how the run-on sentence empowers the read.

The thought of Reyes being taken down by a group of marshals clamped and glued my teeth together for a long moment, squeezed the chambers in my heart shut.

With a growl, his black robe materialized around him, around us, and a hand thrust out and locked on to my throat. In the time it took my heart to beat again, I was thrown against the shower wall with a razor-sharp blade glistening in front of my face.

Good example of slipping a hit of visceral into an action scene.

My innards were in turmoil, but leaning toward happy, as desperate and pathetic as my innards were. Mostly ’cause Reyes did things to them. Delicious, devilish, heart-stoppingly decadent things. Damn him.

Notice the alliteration and the cadence. Powerful!

“I was talking about the curtain,” I said, though my heart skipped a pertinent beat at the reminder.

Notice how one word (pertinent)  turned a clichéd visceral response (my heart skipped a beat)  into cliché play. Fun!

The examples in this blog share fresh psychologically empowered writing. It’s chocolate-mousse-on-your-tongue writing. It makes the reader want more and more and more. It’s the caliber of writing you find in some debut books, and in some New York Times Bestsellers.

I stated earlier, that what I’m sharing in this blog is one of the 7,485 tips, techniques, or systems I teach writers to strengthen their writing. That could be hyperbole. Margie-grads know it could be an understatement. 🙂

I developed seven writing craft courses totaling over 2400 pages of lectures. No hyperbole!

Most of my courses are 350+ pages long. Each course is loaded with deep editing techniques I created, as well as lots of stellar examples, dig-deep analyses, and teaching points. Please drop by my web site and check out the full line-up of courses offered by Lawson Writer’s Academy.

POST A COMMENT AND YOU MAY WIN a Lecture Packet or an online course by Margie Lawson, or Tiffany Lawson Inman, from Lawson Writer’s Academy!

1. Using the Rule of Six for Plotting
Instructor: Shirley Jump

Catch the SWEET DEAL!  Register for Margie’s or Tiffany’s March class by March 1st — and you could WIN an 8 page edit!

Margie Lawson —psychotherapist, editor, and international presenter—developed innovative editing systems and deep editing techniques used by writers, from newbies to NYT Bestsellers. She teaches writers how to edit for psychological power, how to hook the reader viscerally, how to create a page-turner.

Thousands of writers have learned Margie’s psychologically-based deep editing material. In the last seven years, she presented over sixty full day Master Classes for writers in the U.S., Canada, Australia, and New Zealand.