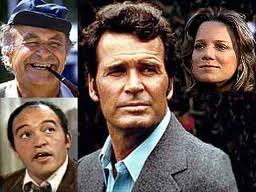 It’s Techie Tuesday here at More Cowbell, and you know what that means, right? Some nifty piece of technology, know-how, or writing advice is coming your way. Today, I’m talking about the late, great mystery and TV writer, Stephen J. Cannell. Trust me, most of you have watched his shows.

As many of you know, I’m blessed by geography to live near an active RWA chapter that gets incredible speakers. Several years back, Stephen J. Cannell came to our monthly event to speak and there was a huge flurry of excitement.

At the time, I hadn’t a clue who he was, but I still got caught up in the buzz. My writing pals were there, I was there, and the meetings are ALWAYS a great time.

So Mr. Cannell gets up to talk and he just looks like a Hollywood guy: sexy in a lanky-guy way, salt and pepper hair, snappy dresser. His easy smile and raspy voice commanded attention.

Here’s what I know now that I didn’t know when I arrived at the meeting that day:

Obviously this man changed my life and had enormous impact on me as a writer.

When it comes to a story, 3-Act structure is…everything. And I never quite understood what it was until that first day Stephen spoke. I’ll never forget that moment, when he stood at a podium in front of 100 writers and broke down When Harry Met Sally in easy 3-Act detail. He did a few other movies, but this post is going to be long enough as it is, so we’re sticking with my favorite one.

A paraphrase of Cannell’s description of When Harry Met Sally:

Take the movie, When Harry Met Sally. The First Act is all about the hook, or the premise. In this case, it’s that “men and women cannot be friends.” So you’ve got the set-up where they meet and then decide they’re not going to be friends.

Act Two opens with Harry and Sally meeting up again in the bookstore and slowly becoming good friends. Their friendship becomes the single most important thing in their lives and the worst thing in the world would be to lose it. The scene in the wedding is the dark moment climax of Act 2 because it is the end of their friendship as we know it.

They’re off to the side of the reception, speaking in furious whispers about why they’ve been at odds since the night they had sex:

The scene ends with her slapping him across the face, saying, “Fuck you, Harry!” and storming away. The curtain closes on Act Two because the WORST thing has happened…the two of them are no longer friends.

Act Three is the “clean up” act, the resolution to your story. In this case, it’s all about Harry trying to get back into Sally’s good graces so the two of them can be friends again, just as they were. Sally’s having none of it.

Finally, on New Year’s Eve, Harry has his turning point and we get the final scene of the movie where he runs through New York City to get to Sally before midnight. When he sees her at the party, he gives his now famous I-Love-You speech:

If you want to wallow in the brilliance of When Harry Met Sally dialogue, click here.

I don’t know if this quick breakdown turned the lightbulb on for you, but it sure did for me the first time I heard it. To see Stephen Cannell’s “official description” of 3-Act structure click this post – he does a fantastic breakdown of the movie, Love Story.

Cannell discusses a myriad of “trade secrets” in this entire series on writing that he did on WritersWrite.com. But the main piece of advice that I remember, besides my 3-Act Epiphany was the way he’d refer to the villains in a story. I can hear his voice in my head right now.

He called his bad guys “the Heavies” and he was brilliant with them. It’s no surprise to me why his television shows were so wonderful. Whenever, he’d get stuck in a story, he’d ask himself, “What are ‘the Heavies’ doing?” Once he wrote the story from their angle for a while, he’d get back on track.

If you’d like to hear his voice too, he’s got more than 60 videos recorded on YouTube. Here’s some simple, yet sage advice from the man himself.

Creating A Long-Term Career As A Writer by Stephen J. Cannell

If Stephen Cannell is a new discovery for you, enjoy! He’s awesome. His mantra was: “be honest, be sensitive, be reasonable, be fair and you can succeed marvelously in business and in life.” Go, Steve.

Who has made the biggest impact on your writing life? Do you have any other 3-Act tips for the rest of us? Enquiring minds always want to know here at More Cowbell!